Finally the official calendar of the 13th edition of the World Rookie Tour has been announced! The first two stops, the NZ Rookie Fest and the World Rookie Rail Jam by Skipass, were a blast. Now the tour goes on with spectacular events in North America, Asia and in Europe, where will take place for the first time the Valle d’Aosta Rookie Fest from the 21st to the 25th February 2018 at the amazing snowpark in Pila, Northern Italy, surrounded by the highest and the most beautiful mountains of the Alps.

World Rookie Tour represents the highest level of competitive youth snowboarding contests in the world, with more than 35 national teams competing each year in the rookie’s and grom’s divisions, and more than 1.000 riders joining it annually. All the events are life experiences where freestyle events are combined with lifestyle activities, workshops and social moments.

Next stop is in Corvatsch for the third edition of the Corvatsch Rookie Fest, from the 13th to the 17th December 2017. Register here now! 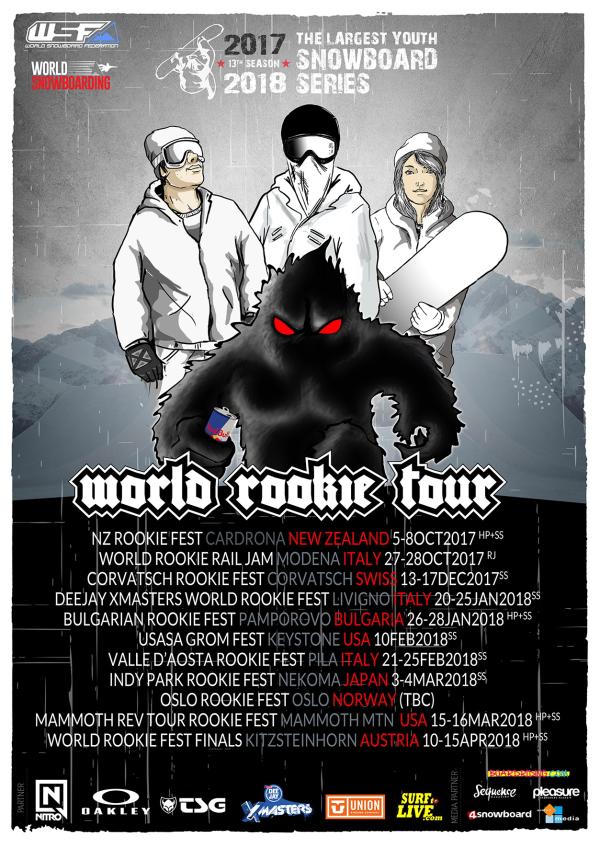 If you dream to become a professional snowboarder,

then your future starts from Rookie Fest!

ABOUT THE WORLD ROOKIE TOUR The World Rookie Tour is organized by the Black Yeti ssrl in collaboration with World Snowboard Federation and its National Snowboard Associations. It consists of a selection of high quality International events, the so called â€œRookie Festsâ€, reserved for riders under 18’s only, in Europe, North and South America, Oceania and Asia. The World Rookie Tour consists not only of competitions: it also features loads of other activities to help rookies to grow in the field of professional snowboarding, such as photo & video shootings, avalanche and rescue clinics, meetings with photographers and international team managers, parties and English talks. Since year zero it awards tickets to world class events such as The Arctic Challenge, The Air & Style, The World Snowboarding Championships, invitations to professional snowboard photo & video shootings, and freeride trip in Chile. Every year the tour crowns the World Rookie Champion at the end of season, at the World Rookie Finals, a unique event where the best youngsters from almost 30 countries compete and have fun. More information at www.worldrookietour.com.